I am a feminist. For someone who doesn’t like labels, this is one I have recently been comfortable declaring about myself.  I have not burned my bra – it wouldn’t make much of a fire anyway! For me, being a feminist means that men and women deserve to have equal rights and historically, and currently this is often not the world we live in.

As my daughter says, being a feminist does not mean you hate men. Not even close.  I am surrounded by men who I admire, respect, and love.  Strong men are never threatened by strong women. The Prime Minister of Canada, Justin Trudeau declared himself a feminist.  So did the Dalai Lama.

We talk a lot about girl power at our house- even with my 13-year-old son.  Girl power does not take power away from men but compliments it.  Women are often conditioned to not own their strength and their power.  For me, calling myself a feminist was not always the case.  For most of my life, I didn’t give being a feminist much thought. Because of so many women, who paved the way before me, I grew up in a generation of women who fully expected we had choices and could be who we wanted to be.

I recently read about two women who are considered pioneers of the women’s rights movement- Sarah and Angelina Grimke. They were born in the South around 1800 and lived in a family who owned slaves.  They saw the injustice of this lifestyle and started speaking publicly about it, which was considered very radical.  It was especially controversial that in some of their public forums, they spoke to a crowd of men and women.

At the time, it was unheard of for a woman to suggest to men- well, anything.  That right was only reserved for men.

What resonated with me about their story was their first cause was to speak out against slavery and while doing so, someone suggested to them they should make women’s rights their cause too.  So, they did. Interestingly, it was an afterthought, they started speaking out about women’s rights.  I find that story so compelling because Sarah and Angelina Grimke who were clearly facing discrimination because of their gender, felt compelled to speak out on behalf of others before they even considered defending themselves.  The story resonates with my journey.  I clearly remember at a young age feeling outraged by the injustice of racism, which like Sarah and Angelina didn’t affect me personally, while experiencing sexism and accepting it as part of life as a girl.

That is the blessing and the curse of being a woman. We are often nurturing and caring by nature and defense of others rights is more comfortable than defending our own.  I think it is important to recognize that nature within us and embrace the compassion we have for others, but not let it restrict our voice in speaking out about rights for ourselves.

As I said in past posts, this election has so many lessons for our country if we are paying attention. There is no way to analyze this election without considering the issues of sexism and sexual assault. They became front and center and just like racism, when you expose an ugliness, you no longer have the luxury of pretending the ugliness does not exist. That is the first step toward healing- admitting there is a problem.

Because the women’s rights movement has come so far, and some of our laws have changed to protect women from blatant sexism, it may seem like a thing of the past.  Just like racism, sexism did not go away, it has just become less politically correct to be publicly sexist.  Then along comes President Elect Donald Trump. Wow. Just wow.  I guess degrading women is “okay” again.  The thing is, ITS NOT OKAY!!  We should not allow him to normalize “locker room talk” and “boys being boys.”

Dismissing that behavior is degrading to women, but also very disrespectful to men.  We should expect more from our husbands, our sons, and especially our leaders. I have been surrounded by wonderful men my whole life who respect women and treat them with dignity and to pretend that is “just how men are” is a disgrace to men too.  I am not naïve. I have been around plenty of men who talk this way about women but we certainly don’t have to accept it as the way it will always be.  This is especially for those in power.

Donald Trump’s sexist statements and actions have a long history. It is no secret that rich powerful men have used their status to use women as objects to validate their power and wealth.  They get away with it and women often accept it as the way it has always been. Just like Donald Trump’s blatant racism, his blatant sexism was not a deal breaker- even for some women.  I fully understand, many people felt compelled to overlook it because of various reasons, but we still should talk about the consequences of validating someone who has been so publicly vulgar towards women.

Leadership has power, and actions speak louder than words.  After the tape was released in which Donald could be heard bragging about how he grabs women and kisses them without their consent and they “let me do it.”  The blessing was, women have felt empowered to speak out about how this made them feel.  Women need to keep speaking out.  We will not be silent about sexism and assault anymore.  I know I won’t be and I know I am not alone. I think that video awakened a sleeping giant, and has woken us up from our complacency that there is still a need for women’s rights activists.  We have clearly not done enough.

In my estimation, we need more women in leadership, and whether you like Hillary Clinton or not, November 8, 2016 was a rough day for the women’s rights movement. 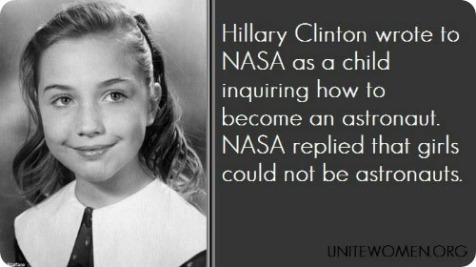 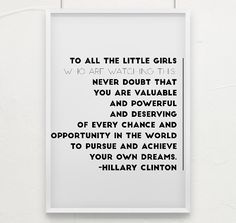 A major party had finally elected a woman to be the nominee for the President of the Unites States of America.  We didn’t just nominate any woman, we elected by many people’s accounts the most qualified person- man or woman who has ever been considered for the Presidency.  She ran against the most unqualified person to ever run for our highest office. And she lost.

I found a quote that resonates with me regarding what I believe is in part why Hillary Clinton was unsuccessful in becoming elected despite her undisputable better resume and qualifications. I don’t think she was “perfect enough” for the standards that we hold for a woman to consider a job of that caliber.

And make no mistake the standards are higher and different.  Ta-Nehisi Coates said, “If I have to jump six feet to get the same thing that you have to jump two feet for- that’s how racism works.” 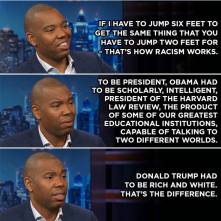 If I replace the word racism for sexism, that is exactly what I saw happen in the election.  For a woman to even consider becoming President, she must have an impeccable resume, and job qualifications, while men just need to, well have a penis I guess?  And for a woman to have the audacity to consider becoming the leader of the free world, she better never have made a mistake.

For the males considering the job, the standards for mistakes were, let me think, looks like it was just the penis again.  Sorry to be so crass, but this is my view.  Because we are comfortable with men in leadership and are willing to forgive them for all kinds of errors and mistakes, it makes seeking a leadership position that much easier.  Donald Trump had to jump 2 feet, and Hillary had to jump 6 and it still wasn’t high enough.  I call this the penis pass.  If you have one, especially a white one, you get a pass for all kinds of behavior, those of us who do not, will never get. This pass does not just harm women.  It also harms the millions of respectable men who live life with integrity and honor.  Men that have those qualities should be lifted up and given positions of power.

If you don’t believe me that’s okay but I would like you to consider a scenario in which a video had been uncovered of Hillary saying, “When I see a man I don’t like, I just grab him by the balls.  I can’t help myself.  It makes me feel powerful and because I am rich, I get away with it.”  Can you imagine a woman being forgiven for that statement?  Would people say, “She can’t help it.  That’s just how women who have power talk.”  The consideration to me is laughable. It’s hard to imagine a woman saying this, but if she did, it would be an alternate universe from the one I live in for her to be forgiven for it.

I have held leadership roles for my entire professional career and have been fortunate to work in an industry that embraces women in leadership. I have not felt like a victim and have been blessed with the opportunity to lead. This is not the case for a lot of women in many other industries.  Especially the highest paying ones.

Currently, per Catalyst, a nonprofit organization with a mission to accelerate progress for women through workplace inclusion, 23 women hold the CEO position at Fortune 500 companies.  That means 477 men, or 95.4% of all men hold the CEO positions for the largest corporations.  In the year 2000, the number of women CEO’s for Fortune 500 companies was 3.  Three women and 497 men.  You could argue we have made progress, but with women representing 50% of the population, we have a long way to go.

Do women contribute to sexism? Absolutely.  Check out this disturbing photo of a Trump supporter.  I can’t decide whether to laugh or cry.

I am writing this to perhaps speak to women and men who have not considered their role in creating a more equal world for all people- men and women.  Once we acknowledge disparities, the hard work can be done to make our country and our world a more equitable one.  Despite the setback (and this photo), I see hope everywhere.  I think the awareness that has been raised by the recent developments in our country will spark change and activism.  If Hillary Clinton had won, we may have done the same thing we did with racism. See- we’re fine.  We are not a country of sexists.   We have elected a female President.  Quit whining.  I suggest we use this as the catalyst to learn,  and grow, because I firmly believe a more equal world, is a better world- for everyone.

I am curious to know if you consider yourself a feminist or perhaps haven’t considered it at all?

4 thoughts on “My Journey to Feminism”