I have had an ongoing debate with my boyfriend about the appeal of 50 Shades of Grey. I first heard about this book a few years ago at a golf tournament.  A woman, who is the Principal at a school was talking about this new book she was reading and I was intrigued.  I thought it was a love story.  I heard a couple more mentions of it, so decided I should buy it to see what everyone was talking about.  My daughter was having a birthday party, and we went to the beach.  I pulled out my new book, sat back in my beach chair and started reading.  Just when I realized this was definitely not your average love story, I was interrupted by one of my daughter’s friends who said to me, “My Grandma is reading that book!”

After I finished the third book, I must say I was relieved it was over. The controlling relationship made me extremely uncomfortable since I had personal experience with that in my life.  I did start pondering what made the series go viral?  My boyfriend is convinced it was the sex.  He finds it funny that so many women read these books and I get exasperated every time I explain my theory to him, which makes him laugh even harder.  Women are certainly not supposed to enjoy reading about sex- a super sexist idea that still exists!  I am intrigued why so many women did- including Grandma’s!  I have no doubt that was part of the interest for many women, but my theory is, it is more than that.

Does anyone remember the lobster episode in Friends?  Phoebe is talking about Ross and Rachel’s relationship and she announces, “She is his lobster.” 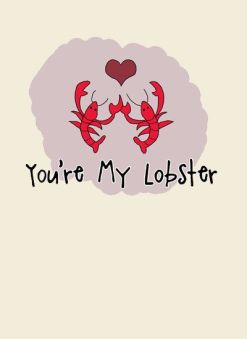 When her friends look puzzled.  Phoebe goes on to say, “Come on you guys, it’s a known fact that lobsters fall in love and mate for life. You know what? You can actually see old lobster couples walking around their tank, you know, holding claws.”  I have researched this claim, and in typical Phoebe fashion, she is making this up, but we get the point.  Women love this idea.  The idea that a man and a woman are soul mates, and once they find each other they don’t have eyes for anyone else.

To me, that is the appeal of these books. It’s not the sex but the desire.  In my opinion, the real appeal is the power of one woman changing a man’s view of what he thought he wanted out of life.  He sees her for her, and wants a real relationship. He desires her but he desires more than just her body.  He sees her and can’t live without her. She is his lobster.  He chooses her when he could choose anyone.  He only has eyes for her.

There are so many things wrong with the relationship in the books, not to mention the idea that an all-consuming relationship is the answer to people’s happiness, but I am not analyzing that. I just want to make the point that many women and I would argue some men fantasize about the idea of someone seeing you, really seeing you, and the desire for you blinds them from the desire for anyone else. And by the way, I also think you can be a spiritual person and still have read 50 Shades of Grey.

Is anyone with me on this?